Back
€ 22 Add to cart
Gili Tal Spaces for Reflection

“He just came in and asked where the bucket was for the amnesty. I asked him what amnesty was he talking about? And he told me to stop fucking about. I noticed he was holding his body strangely, like he was in intense pain, like spasms and he was sweating. He started repeating ‘Just tell me where the bucket is’ and then I saw he was bleeding through his trousers, from his crotch area. I called for assistance. Officers Shant and Folger came straight through and Shanty called for medics, but the guy was really distressed, he was just shouting to bring him the bucket, or where’s the bucket for the amnesty.

We tried to check his wound but he wouldn’t let us near it, he became quite violent. Folger to try calm him down got the bin, took out the bin bag, and brought it to him and was like if you have anything you can put it in here. I guess he thought he’d calm down and let us help him if he handed whatever he had over. Anyway the guy took something out from his pocket and dropped it in the bin, then as soon as he did, he stood up and limped over to the door.

I followed him trying to get him to stop still, but he was determined to get out to the street, and then I saw the ambulance arrive. The guy was shouting at us to leave him alone. There was loads of blood coming from his crotch and we had to restrain him with the medics for them to take a look.

He was screaming, ‘Don’t sew it back on.’ They started to control the bleeding and I explained he’d put something in a bucket. The medics said it was a body part and we should get it on ice. When he heard them say this the guy really started fighting, then I came inside with a medic and they went with Folger to get ice, then I saw you. Is it his penis? Is he still out there?”

—From “We’re Living in Complex Times: An organisational police drama about a Penis amnesty” by Oliver Corino. 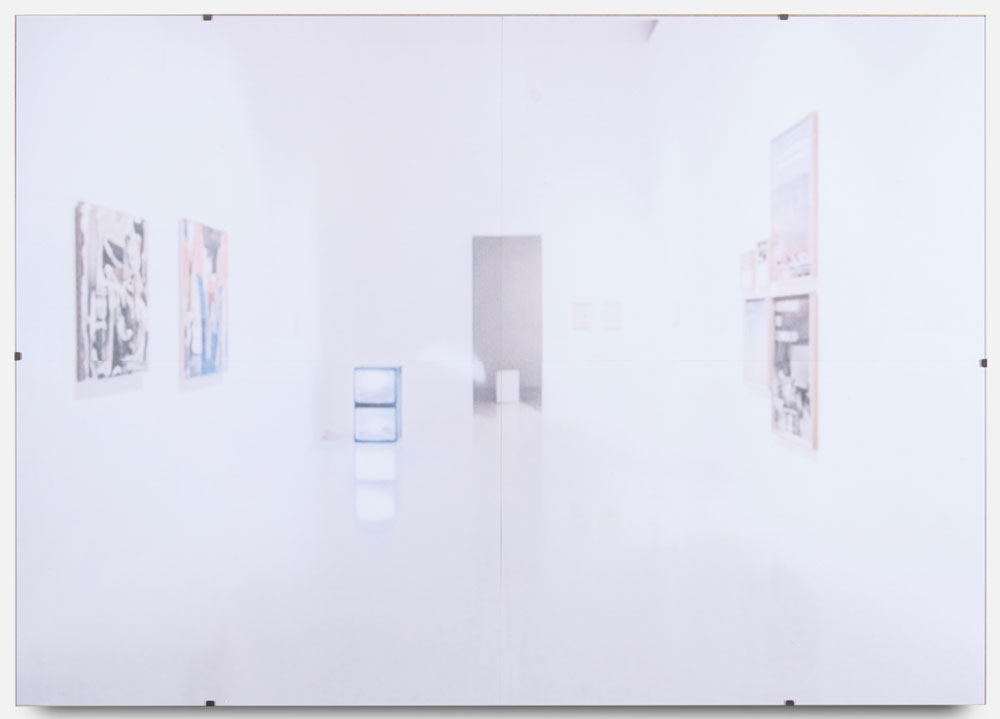 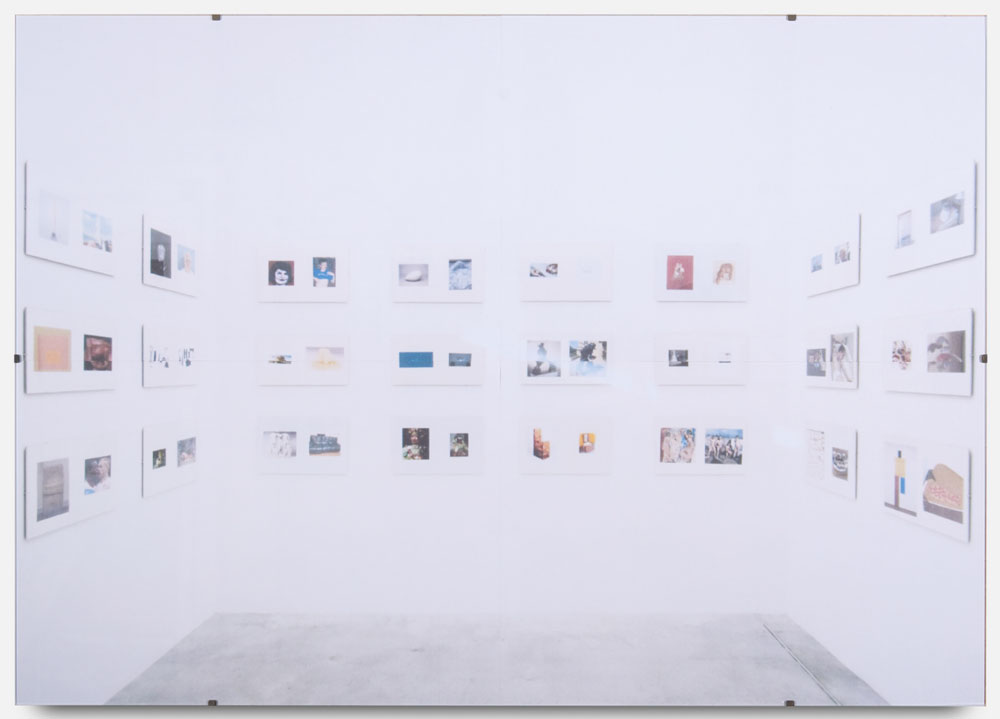 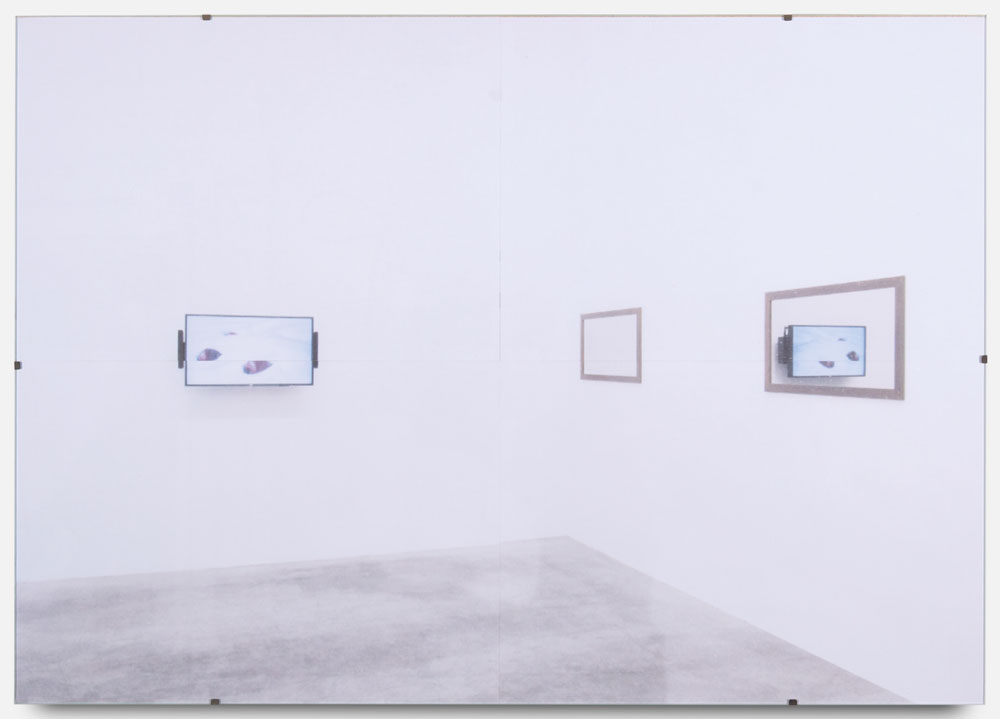 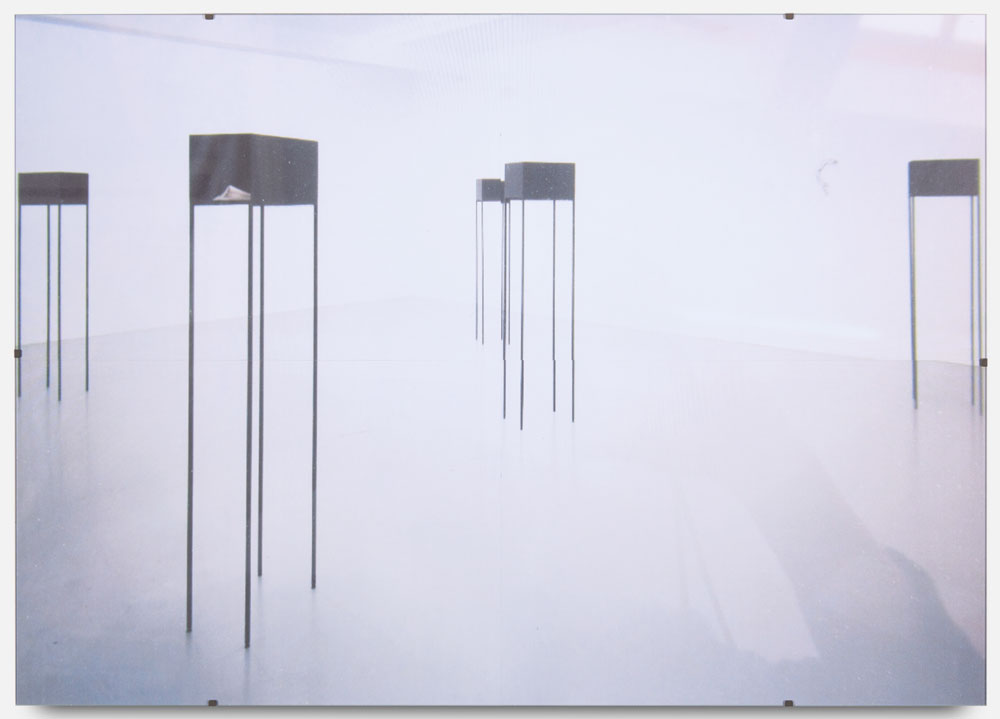 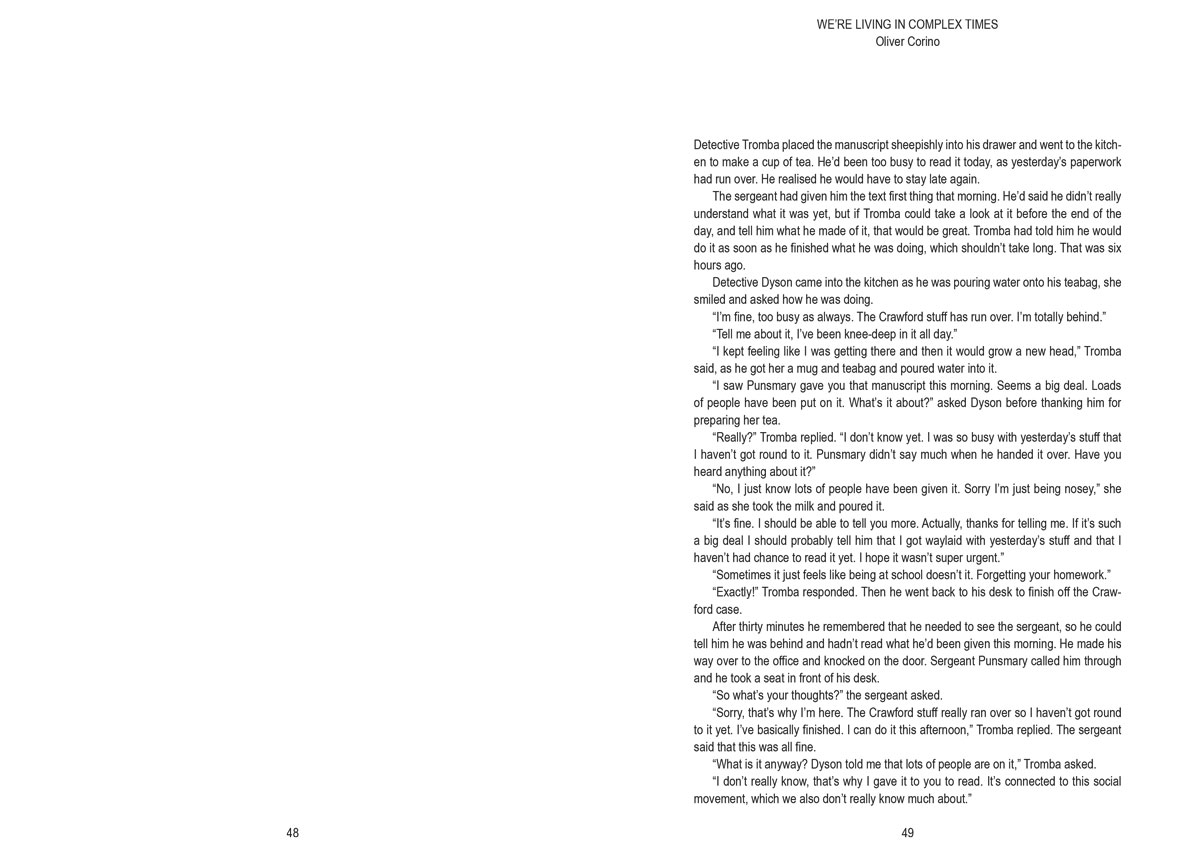 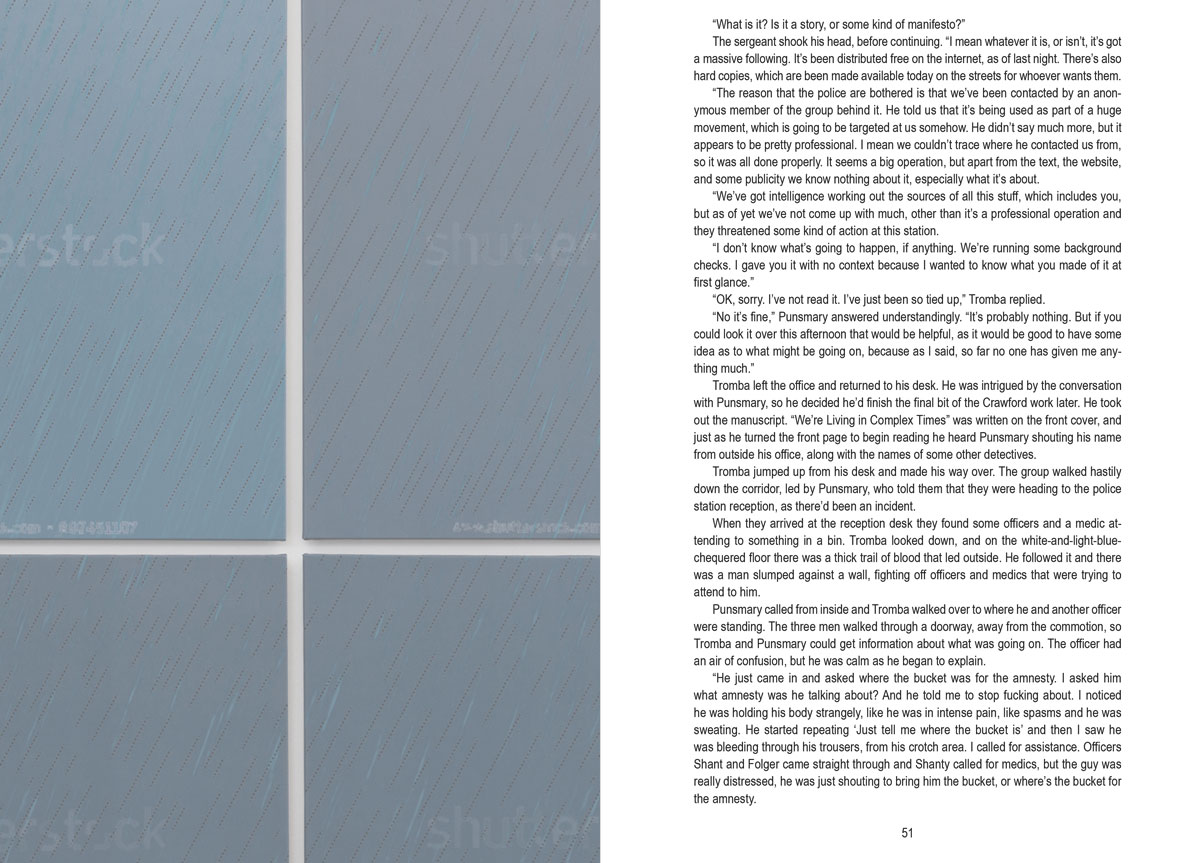 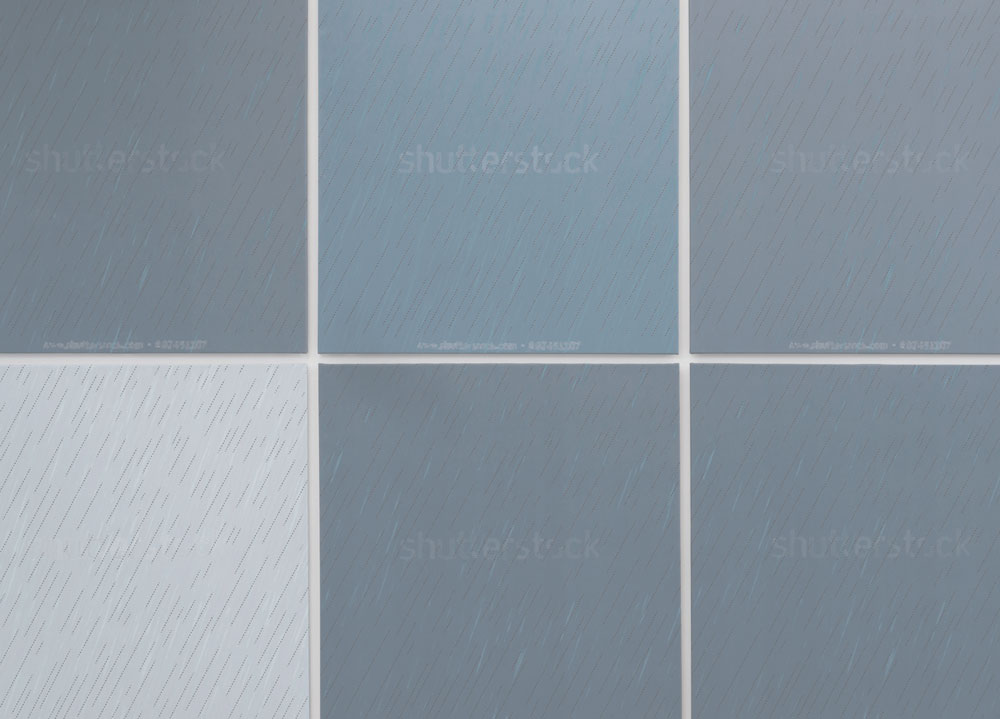 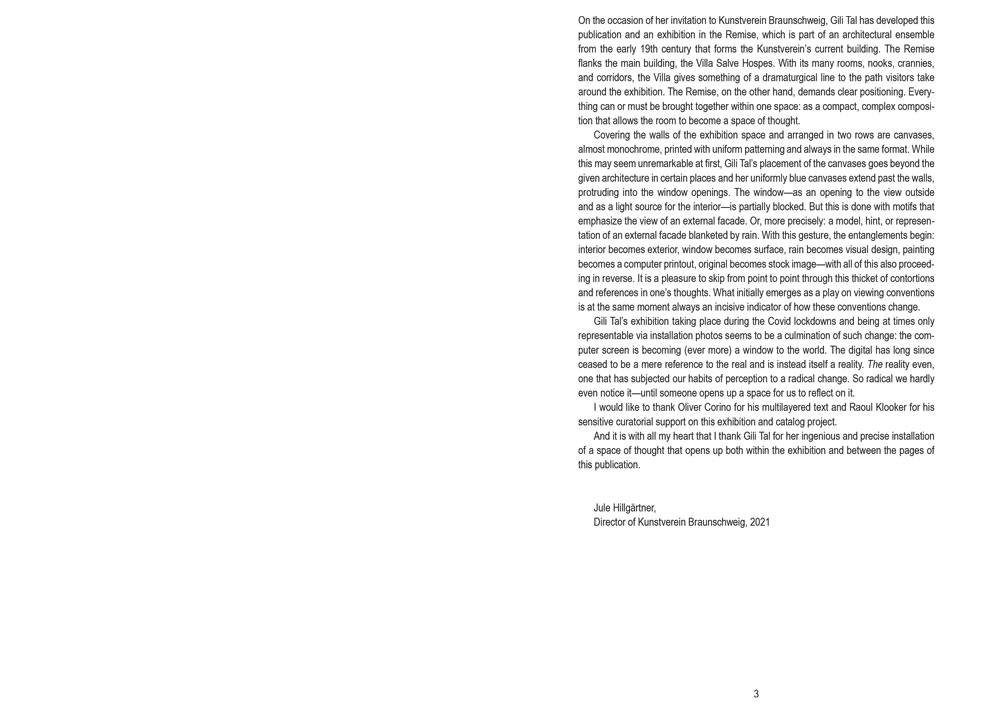 Gili Tal’s works examine our understanding of public and urban life by appropriating strategies from various genres of commercial photography, including the proliferation of exhibition photography online – that is, the one that intimates communication of information outwards whilst simultaneously (maybe not deliberately), withdrawing, turning in.

Spaces for Reflection, the series of works printed in this volume, while not exhibited at the Kunstverein Braunschweig was intimately linked to the conception of that exhibition. Addressing the practice of scrolling through image feeds of nearly empty white rooms online, these pictures of the artist’s computer screen are imbued with distancing qualities: loss of resolution, loss of contrast, a misty dimming of light, reflections, and the moiré pattern over their surfaces, inviting to reckon and question our contemporary viewing conventions.